The Institute of Industrial and Systems Engineers (IISE) announced this morning that they have elected three new members to their 13-person board of trustees (BoT). ISE’s Tim McGlothlin will serve as the president-elect of IISE starting on April 1st. “You agree to serve for three years, one each as President-Elect, President, and Immediate Past President,” explained McGlothlin.

Each year IISE’s CEO and Bot leadership generate and vet a list of potential candidates. In January, IISE holds their institution-wide election to select their newest BoT members. Candidates are considered based upon their professional background, previous volunteer service, and proven leadership within IISE. “I was approached by the CEO (Don Greene) and asked if I would consider running for the President-Elect position,” shared McGlothlin.

“I’m fortunate to have served in several IISE leadership positions including Conference Chair for IISE’s Applied Ergonomics Conference, said McGlothlin. “I also served two terms as Senior Vice President for Technical Operation on IISE’s Board of Trustees. I love the industrial and systems engineering profession and the potential opportunity to work again with the IISE staff headquartered in Norcross, GA was a ‘no-brainer’.”

“Tim’s dedication, commitment and service to IISE and in particular to the world of ergonomics make him very well qualified to assume the leadership of our flagship professional organization,” praised NC State College of Engineering Dean Louis Martin-Vega who served as IISE President in 2007 – 2008. “We in the College of Engineering at NC State are delighted by Tim’s selection as President of IISE and extend our congratulations to him for this very distinctive recognition.”

McGlothlin plans to focus on some key themes as president, membership retention/growth and a greater international presence. “We must be an international player within a vast global market of ISE-types,” he confided. “We must continue to increase the value proposition of our memberships through more timely training, networking opportunities, professional publications, and high-quality conferences. As President, my role will be basic yet critical to the growth of the profession and IISE – establish an open line of communication between these constituents; focus on strategies that would increase the value of the Institute’s products and services; and positively influence the global nature of our profession.” 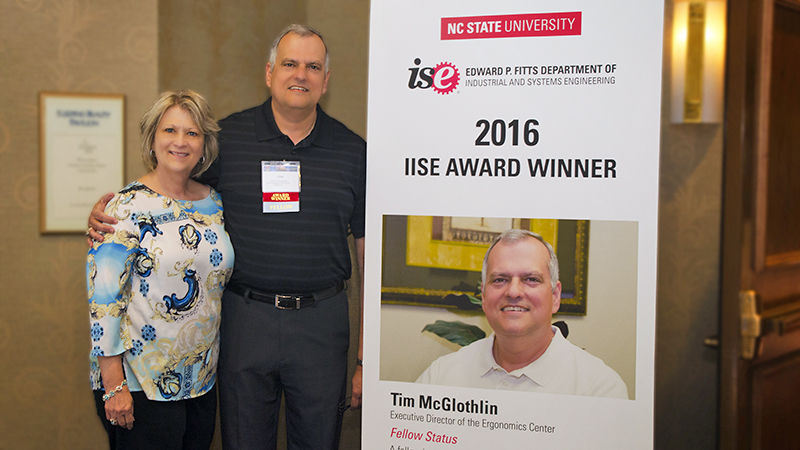 At the 2016 IISE Annual Conference in Disneyland, McGlothlin received IISE Fellow status. A fellow is the highest classification of IISE membership and recognizes outstanding leaders in the profession for their nationally-recognized contributions. To learn more about ISE’s trip to Disneyland, see The IEiest Place on Earth.